What an irony really if one side a powerful US President Barack Obama quotes the famous Dialogue “Bade Bade Shehron me…Choti Choti Baatein…..SENORITA’..  of a Bollywood movie in his farewell speech here in India, on the other side our film Directors and Producers are busy making remakes after remakes in Bollywood. It seems originality have lost its grounds. After seeing this continuous trend for years now, one could ask himself “Do we have a shortage of creative and innovative script writers who can write original stories for the Film-Industry? Whatever may be reasons behind it but Bollywood needs to cut this convention by showing some creativity and innovative ideas in their approach in making films. We have around 1110 Indian remake films of all languages made in our country so far, according to a Wikipedia page.

It is assumed that the most pertinent reason for all these developments in Bollywood is the growing Box Office competition that happens on every Friday. Whether someone is a Producer or an Actor, all you want a ‘HIT’ film which can generate good business profits on Commercial Theaters.

Only last year, we had 11 Remake movies in Bollywood. This time around 5 remake films have already lined up for year 2015. Let’s briefly talk about them one by one in our next segment. 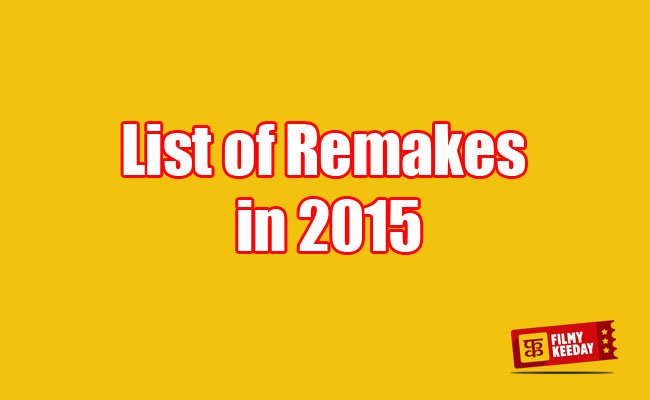 Emraan Hashmi and Amyra Dastur starrer film Mr. X is the modern adaptation of Anil Kapoor’s superhit movie Mr. India. It is a 3D thriller film directed by Vikram Bhatt while Mahesh Bhatt is producing the film. This bhatt camp film is written by Shagufta Rafique. Film is due for release on 13 February 2015.

Tevar is remake of Telugu melodrama film Okkadu. Film was released on 9 January 2015 and received negative reviews from critics, and could not perform well at the box office. Amit Ravindernath Sharma has directed this film while it was produced by Boney Kapoor. The multi-starrer film has Arjun Kapoor, Sonakshi Sinha, Manoj Bajpayee and Rajesh Sharma in lead roles.

Gabbar is a remake of 2002 Tamil film Ramanaa irected by Krish and produced by Sanjay Leela Bhansali and Viacom 18 Motion Pictures. Superstar Akshay Kumar in is playing the title role in this film while Shruti Haasan, Prakash Raj, Sonu Sood and Nikitin Dheer will appear in supporting roles. The film is now expected to release on May 1, 2015 though was earlier scheduled to release in January 2015.

The film is directed by Karan Malhotra and produced by Karan Johar under Dharma Productions along with Lionsgate Films and Endemol India. It is an official remake of the 2011 Hollywood film Warrior. It stars Akshay Kumar, Sidharth Malhotra and Jacqueline Fernandez in lead roles and also features Jackie Shroff in a pivotal role.

Rocky Handsome remake of The Man from Nowhere

A Hindi action-thriller film directed by Nishikant Kamat while co-produced by Sunir Khetrapal and John Abraham. The film is a loose adaptation of the 2010 Korean film The Man from Nowhere. It is slated to release on October 2, 2015.

Hero is the remake of 1983 film Hero, Hero starring Suraj Pancholi (Son of Aditya Pancholi) in the lead role and Salman Khan is producing the debut film of Suraj Pancholi. Hero is an official remake of Hero 1983. which was directed by Subhash Ghai.

Note : Information may change as per new Updates!