There was a time when actresses hesitated to portray negative roles as they feared they might lose their fans and won’t get lead roles easily after negative roles.

The mindset of actresses changed and now every successful actress wants to be in a gray role to prove her acting skill, Versatility, and potential to audiences and Directors.

Here is the list of Top 10 actresses who delivered an outstanding performance in negative characters and proved their might.

Priyanka’s negative role in this movie changed her career significantly. Earlier in this movie, she was a glamour doll for directors, but after Aitraaz she proved her caliber and became a threat to all the top actresses of Bollywood.

Tabu has always been very subtle in her acting skills, thinking of Tabu in a negative role was something we could never ever expect. But she portrayed the negative role of Nimmi in Maqbool as if the role was meant for her only.

Vidya Balan, a cute girl from Hum Paanch. Who could have thought that Radhika Mathur of Hum Paanch could become Krishna of Ishqiya. The role best fitted for a thunderstorm actress.

Who can forget Urmila’s role in Pyaar Tune Kya Kiya, an obsessive lover? She justified the role of a stubborn girl who ends up being over an obsessive lover and tries to even kill herself and others.
Recently, Urmila again attempted a negative role in Karzzz, a remake of yesteryears blockbuster movie Karz. She bagged the role of Kamini Verma.

The gorgeous bubbly girl of Bollywood, whom you have seen laughing and giggling all the time has also proved her potential in a negative role.  She portrayed the role of a rich and arrogant schizophrenic woman in Armaan.

Kajol with SRK is known as the best romantic couple of Bollywood. The romance queen in a negative role???  Yes, you heard it right, this romance queen killed 2 people in a movie. Scary!!!! But as always she is a great actress and she justified the role really well.

One of the top Actresses of Bollywood- Kareena Kapoor, also had been part of negative roles in Fida and Agent Vinod.

When we talk about negative roles, we cannot forget Anu Agarwal and her movie Khalnayika.

With her negative role in Qayamat, she gave chills to every actress who has played a negative role. She seemed like the toughest competitor as a villain to all the actresses at that time. 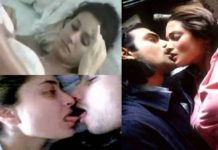