In India, there’s a trend of crediting the superstar or main lead of the movie for its success while the work of the director, who should actually be credited, is often overshadowed in the midst of stardom.

However, things are changing in the industry and people are realizing the importance of director in the film, thanks to some great established ace directors like Mani Ratnam, S.S. Rajamouli, and many others while the audience has also started embracing and appraising the work of upcoming directors like Neeraj Pandey.

In the year 2015, we saw some awesome movies being made under the direction of both established as well as budding young directors. This year, filmmakers took the much-needed risks to create cinema to satisfy their passion rather than just making money. And with the success of their movies, taking such risks actually paid off while inspiring many directors and filmmakers to produce movies with new story lines and concepts in order to take Indian cinema to a newer level.

With so many nicely crafted movies released this year, it was very tough to choose the best among them to shortlist the nominations for Best Director at fk Awards.

Yet, we successfully shortlisted these nominations below which we believe were the best in the year 2015. 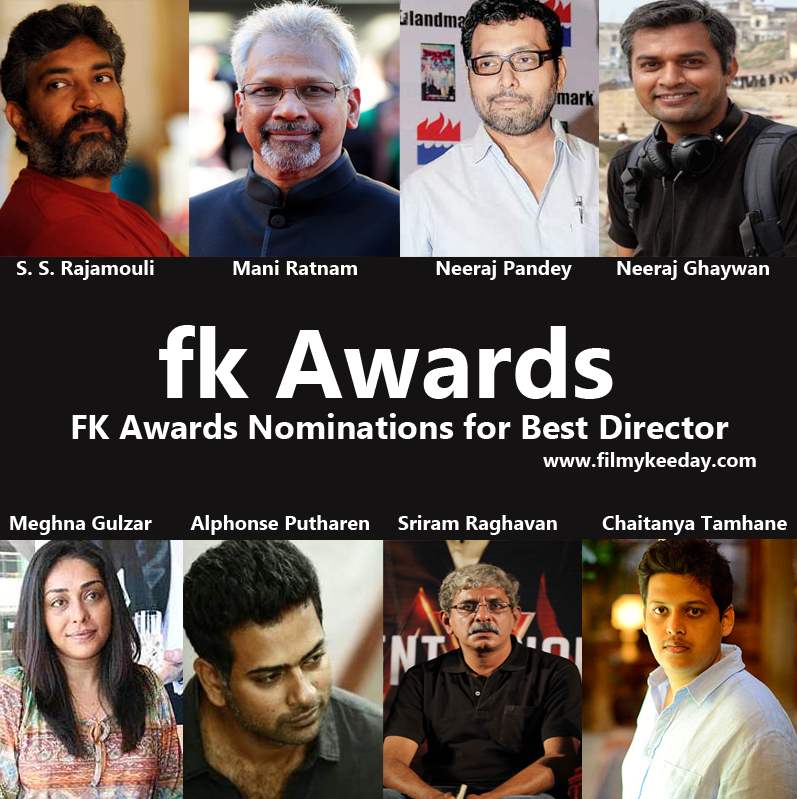 Baahubali: The Beginning is undoubtedly the most expensive film made till date in the Indian film industry. And after watching the movie, we can deduce that the money is well spent as SS Rajamouli has put in all his skills to deliver an unbelievable cinematic experience for the audience with heart throbbing visuals, breathtaking action sequences, and amazing direction. The movie is not a complete package because of the enormous sets and graphics widely used in the movie, but it is because of the vision of the director SS Rajamouli, who saw the unseen and created this marvel that would go into the history as one of the beautifully crafted cinema.

There is no introduction required for this master class director who gave us sensational movies like Nayagan, Roja, Bombay, Dil Se, Guru, and Raavan. Most of his movies often had this element of Romance that was shown in the most sensitive way while addressing some social cause. However, O Kadhal Kanmani is by far different from Mani Ratnam’s style of film making. O Kadhal Kanmani is a light-hearted romantic movie that addresses the life of modern youth and displays their attitude towards love and life.

Neeraj Pandey has already proven his directing skills with some of the finest movies such as A Wednesday and Special 26, both of which keeps you glued to the seats till the movie ends. With Baby, Neeraj has yet again delivered a fantastic movie that grips you from the start till the end. The movie, starring Akshay Kumar, Anupam Kher, Taapsee Pannu, and Rana Daggubati, has been successful in entertaining the audience with a spy action thriller that we haven’t seen much with Indian cinema lately.

After a flurry of short films and assisting with Gangs of Wasseypur two-part series, Neeraj Ghaywan debuted at film direction with Masaan. He showcased his brilliance in his first movie itself, in which he tries to focus our issues on inequality that prevails in our society. It is often tough to handle such socially sensitive elements for ace directors, it shows the courage from the young director, who took up the challenge and crafted an amazing cinema with Masaan.

Based on the 2008 Noida double murder case, Talvar was bound to raise some eyebrows as it is one of the most confusing murder cases in Indian history. However, Meghna Gulzar didn’t follow up to the movie with a real scenario or the verdict directly. Instead, she tries to give us different accounts of the case, which portrays the parents sometimes guilty or innocent. The real incident is still a mystery and Meghna Gulzar does a great job in keeping the mystery alive with Talvar as well.

One of the highest openers at the Malayalam Box Office, Premam has been winning hearts across the country specially among the Malayalis. The main credit for its success must go to its director Alphonse Putharen, who crafts this brilliant romantic comedy for the new generation. The highlight of the movie is its list of 17 debutantes and it must have been a challenge for the director to get the best out of them.

A dark thriller, Badlapur is a story about revenge and rivalry, hence the movie must be intense to display such emotions. Sriram Raghavan did a great job accomplishing those goals with this crime thriller. Given the fact that Varun Dhawan is often seen as the fresh happy go lucky romantic Hero, it was only because of Sriram Raghavan’s direction that Varun was successfully portrayed as an angry young man in the movie and that eventually proves why he should be on the list of nominations for Best Director at fk Awards.

Court is a 2015 Marathi film directed by debutante director Chaitanya Tamhane. Directing his first movie, Chaitanya Tamhane shows the maturity and elegance to deliver one of the best courtroom dramas in the Indian cinema. The film already won the Best Film award at the 62nd National Film Awards and has been selected as the official entry from India for the 88th Annual Academy Awards in the Best Foreign Language Film category. Being the prime charioteer as the director of the film, the main credit must go to this debutante director.

So, these are our nominations for Best Director at fk Awards. However, if you feel that we missed any filmmaker of 2015 that you believe must be on the list, then please let us know in the comments below.