Ekkees Toppon ki Salaami is a Bollywood comedy film directed by Ravindra Gautam, starring Anupam Kher, Divyendu Sharma and Manu Rishi in lead roles. Movie is a satire on corruption and politics. It shows that how middle class government servant, stuck in a situation and his life becomes hell.

Ekkees Toppon Ki Salaami is a good movie, with the punch of comedy and it shows the real face of Politics and business. 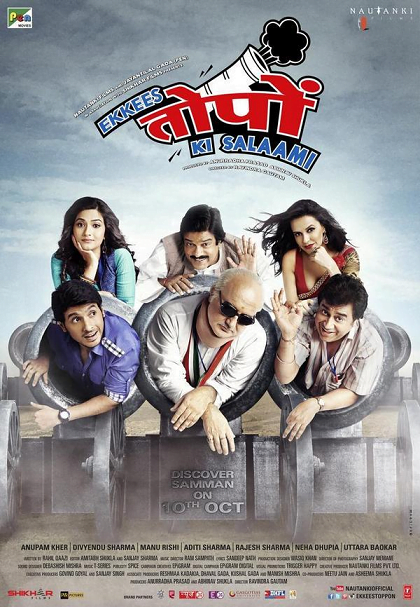 Movie was fine and this movie is a slap on the government and the corrupt system of India. Ekkees Toppon ki Salaami Shows that honesty is not easy in this corrupt world and if you live your life with honesty and hard work you will face many difficulties and problems in your life. Movie is good but comedy is less.  It was not as per my expectations; it should be full of comedy and satirical punches on the system.

Anupam Kher work is perfect as always and he is the perfect common man on screen, like in Kosla Ka Ghosla and Salaakhen and many other Bollywood films.

Songs of the movie are not up to mark, but the story line is good and it’s a decent watch for the weekend. Overall movie is watchable with the few punches and comic portion.

This is a story of an honest BMC Employee, who is in his last phase of government job, his two sons are totally worthless and he is planning for his retirement. But on the last day of his retirement, he gets suspended on the corruption and theft charges and his all pension and provident fund stuck.

He dies with the last wish to get Ekkees Toppon Ki Salaami, and now his two worthless sons want to full fill his last wish.The movie is all about how they give ultimate respect of honour with Ekkees Toppon ki Salaami.

If you are free on this weekend and you don’t have anything to do then you can watch this movie or you can wait for its Satellite release.

No, I will not watch it again, Movie has many mistakes in screenplay and direction and it’s a onetime watch only.