As we all know, Anil Kapoor is coming on Colors with his television series named 24 based on the American Series 24. Apart from its trailer and Anil Kapoor you must want to know some unknown interesting facts about this one of a kind TV-series 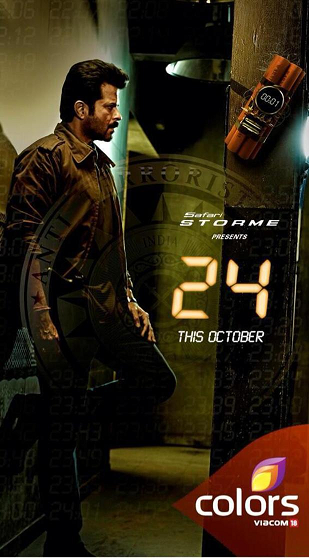 So, Here we are with a list of Facts

Indian TV Series 24 is the first ever adaptation of the American Series 24.

Kiefer Sutherland, Actress from the American Series 24 will also be seen acting in the Indian Series 24.

Mandira Bedi will be seen as a Government Agent in the series. Mandira will be making a comeback to the small screen after a long gap of 9 years.

Rahul Khanna, VJ, Model and Actor will debut with 24 in small screen. Rahul is playing a business tycoon in 24.

Each Episode of Indian Series 24 have taken about 10 days to complete.

Shabana Azmi, is making her debut on Small Screen with 24, she is playing the role of the Head of the Anti Terrorist Unit.

Anupam Kher will be seen in 2 episodes of 24. Apart from doing this role without any fee, Anupam Kher has worked hard in GYM to prepare for the role.

24 is the first ever Indian show to have some prominent Bollywood stars and Models.

Many channels refused Anil Kapoor’s 24, before it was accepted by Viacom 18’s Colors Channel.

Do you remember ‘Chutki’ from Dilwale Dulhaniya Le Jayenge? Yes, Pooja Ruparel is also hitting the small screen with 24.

The original American Series 24 has got The Emmy Award, The Golden Globe Award and The Satellite Award for best Drama Series.

Anil Kapoor did the promotions of 24, as actors and directors do for their movies