Bollywood is remaking almost all hit south Indian movies these days, but once Superstar Rajinikanth was the real king of remakes, at the initial stage of his career he worked in many remakes of superhit movies of Amitabh Bachchan and many other Hindi movies.

No Doubt, Superstar Rajinikanth has more fans in South India, if you compare with Amitabh Bachchan but initially he got stardom from the remakes in 80’s and 90’s.

We are sharing a list of Remakes of Amitabh Bachchan movies by Rajinikanth!

Thee is the remake of Superhit Movie of Amitabh Bachchan Deewar, Deewar is a story of two brothers who chooses a different path in their life. Thee had the same story as Deewar starring Rajinikanth and Suman.

Billa was the official Remake of Amitabh Bachchan starrer Don, Both films were successful at the box office and Rajinikanth had gained huge fame from the movie Billa, Later it was remade in Hindi, Tamil and Telugu Starring Shahrukh Khan (Hindi), Ajith Kumar (Tamil) and Prabas (Telugu).

Padikathavan was the official Remake of Khud-daar directed by Rajasekhar, Rajinikanth and Sivaji Ganesan were in the lead roles.

Dharmathin Thalaivan is the Remake of Amitabh Bachchan and Randhir Kapoor starrer Kasme Vaade in Tamil Version of Kasme Vaade Rajinikanth, Prabhu, Suhasini and Kushboo were in the lead roles. 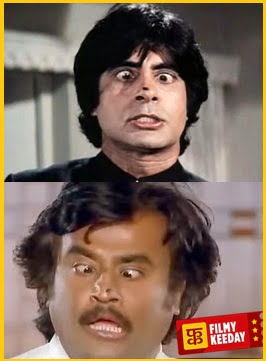 Maarveeran is the remake of Superhit Film Mard but it was not that much successful as Hindi version. Maaveran opens in early 20th century, when India was under British Rule. It’s a story of a Horse cart driver.

Khoon Pasina is a crime action thriller movie of Amitabh Bachchan remade in Tamil as Siva starring Rajinikanth and Raghuvaran in lead roles. Siva had got mixed reviews among the audiences and it was an average grosser at the box office.

Panakkaran (1990) is the remake of Amitabh Bachchan’s film laawaris (1981) and it was a huge hit at the box office and the performance of Rajinikanth was praised by the audiences and critics.

It was remade in Malayalam as John Jaffer Janardhanan starring Mammootty.

Mr.Bharath is the remake of Superhit Bollywood film Trishul Starring Sanjeev Kumar and Amitabh bachchan in lead roles. In tamil version Rajinikanth is in Amitabh’s role and Satyaraj is in the role of Sanjeev Kumar.

There are some more films remade by Rajinikanth in Tamil language, but we can’t include all of them here.

If you know more Remakes of Amitabh Bachchan movies by Rajinikanth, then you can share the name in comments. We will update the list.