Saif Ali Khan is back with another action movie after Race 2, This time his action movie is special because Tigmanshu Dhulia is the director of the movie, Tigmanshu dhulia movies are famous for awesome direction, R.. Rajkumar is releasing next week of the Bullett Raja Release but Tigmanshu dhulia and Saif Ali Khan have enough fan following to beat that movie, Bullett Raja is surely a movie that can get 100 Crore at Box office, but we can’t say anything, because the audience is fed up with masala action films, that’s why Boss was average at Box Office.

Bullet Raja is an Action Drama Romantic movie starring Sonakshi Sinha and Saif Ali Khan. The movie is set in the backdrop of West Bengal and is dealing with Underworld and Mafia. Sonakshi has earlier worked in Once Upon A Time In Mumbaai Dobara! Which was also based on the Underworld. The movie is set to release on 29 November and Movie Critics have kept their eyes stuck on this movie and are expecting a Good response from the audience. 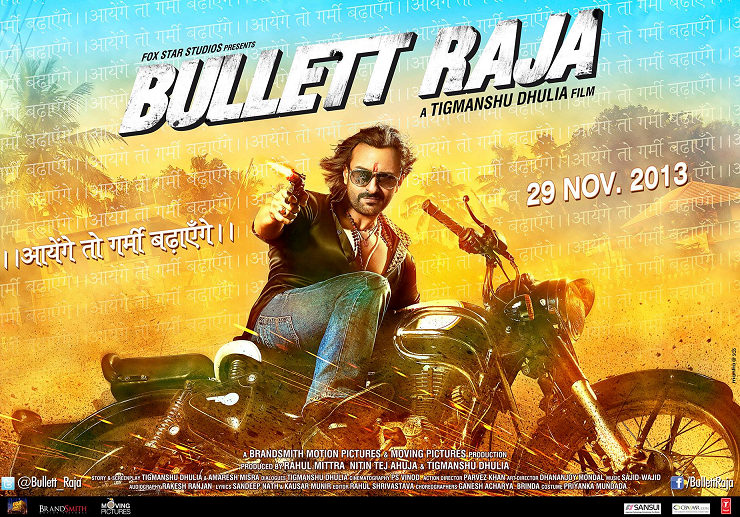 The movie is about a common man who becomes victim of the system and becomes a dreadful Gangster. This common man becomes a dreadful gangster with a pure heart who fights with the corrupt police, government and the industrialists. The movie has got struggle for power, money, fame, greed and revenge. Bullet Raja the dreadful gangster fights for justice, friendship, loyalty, Love and truth.

Music is given by Sajid-Wajid and lyrics by Sandeep Nath. The music of the album is doing good and is a mixed bag. Whereas ‘Tamanche pe disco’ is a peppy number, ‘Saamne hai Savera’ is a soft romantic song. Although we cannot say that album is a sure Hit, but it has grabbed many eyes and will be topping charts for at least a few days.