The erstwhile Calcutta being East India Company’s commercial hub and the capital of British India throughout the 19th century, it always used to be brimming with inspired artists – be it an art form!

Thus, considering historical context, it should not come off as a surprising fact that Bengali filmmakers have given us a lot of great artistic and qualitative films, something which is a rarity today in the age of easy entertainment ruling the roost and pushing meaningful cinema to the fringes. 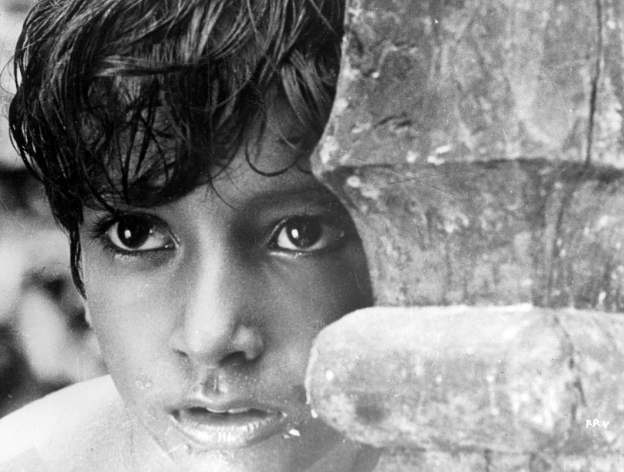 Alright, this one doesn’t actually need an intro, but to the uninitiated: It is often said to be one of the greatest films ever made. It is also what put its then debutante director Satyajit Ray on the world map of cinema, and set off the parallel cinema movement in India.

The title translates to “Song of the Little Road”. It is the first film in what is called the Apu trilogy. It is based on Bibhutibhushan Bandyopadhyay’s 1929 novel of the same name.

Set in the 1910s’ rural Bengal, the film portrays the childhood of Apu and Durga being raised in an extremely poor family. The depiction is rooted in realism, however, the film does tread a bit on romanticism. By its nature, the film moves at an extremely slow pace unlike how most films like to keep the storytelling slick. But, be patient, it is sure to rattle emotions in you!

Perfectly complementing to the film, it has a beautiful soundtrack that was composed by the renowned sitar maestro, Pandit Ravi Shankar. 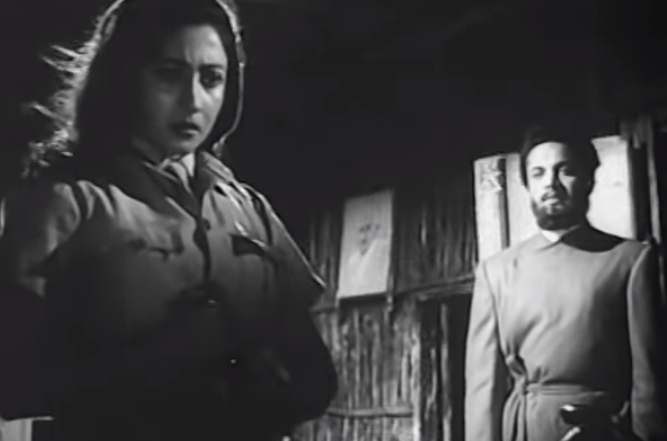 The title translates to “Seven Steps” and it is a romantic drama directed by Ajoy Kar. It is based on Tarasankar Bandyopadhyay’s 1958 novel of the same name.

Set in 1940, it is about how two students at Calcutta Medical College: Krishnendu, a Hindu, and Rina, an Anglo-Indian Christian, fall in love with each other. It is an Othello-ic tale of society opposing two lovebirds. 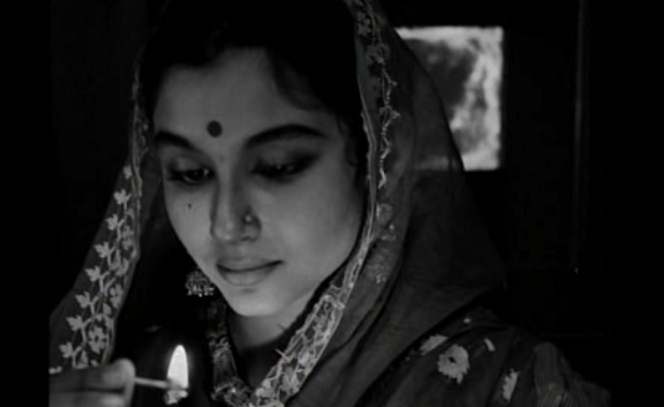 It is the final film in Apu trilogy directed by Satyajit Ray. The title translates to “The World of Apu”. Like Pather Panchali, it is also considered as one of the greatest films ever made. It is based on Bibhutibhushan Bandyopadhyay’s 1932 novel, Aparajito.

It depicts the adult life of Apu, an unemployed graduate in Calcutta. It is in sync with the themes of its prequels.

Another drama directed by Satyajit Ray. It translates to “The Lonely Wife”. It is based on Rabindranath Tagore’s 1901 novel, Nastanirh.

It is set in Calcutta of the late 19th century during the Bengali renaissance.

The film is centered on Charulata, who is married to Bhupati, a news editor. She is very keen on arts, literature, and poetry. Bhupati is a busy man and doesn’t have time to spare for her and Charulata doesn’t have much work to do as it is all taken care of by several servants.

The artistic visuals and cinematography are quite Ray-esque and pleasant. 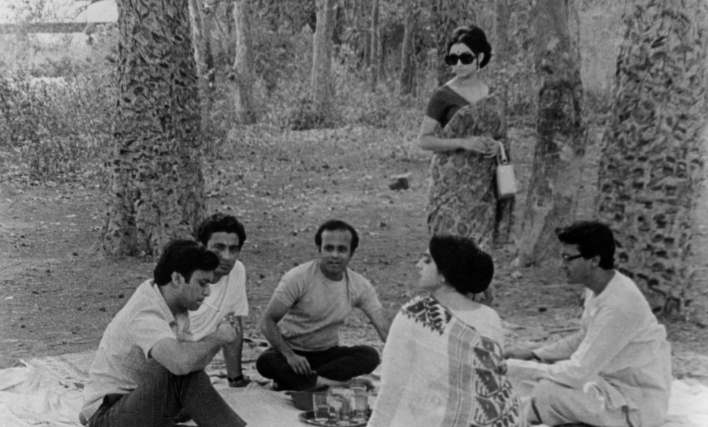 The title translates to “Days and Nights in the Forest”. It is an adventure drama film directed by Satyajit Ray. It is based on Sunil Gangopadhyay’s 1968 novel of the same name.

The story is about four dissimilar men who have deep bonds of friendship with each other. Tired of the urban humdrum, they venture out into tribal lands of Palamau, Bihar now a part of Jharkhand. 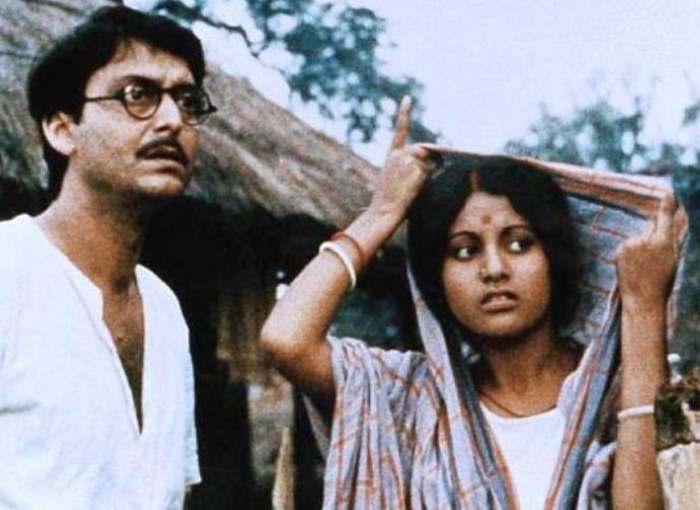 It was the first color film directed by Satyajit Ray. The title translates to “Distant Thunder”. It is based on Bibhutibhushan Bandyopadhyay’s 1959 novel of the same name.

Set in World War II era, it portrays rural Bengal during its worst period ever, the Great Famine. The protagonist is Gangacharan Chakravarti, a young doctor, and teacher. The film initially dives into the traditions of the village which get gradually eroded in the wake of the famine depicting the change in human nature vis-à-visiting hunger and starvation. 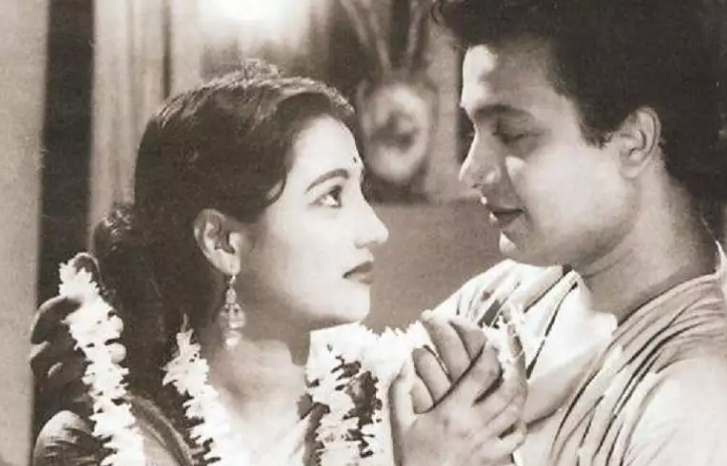 Another romantic drama directed by Ajoy Kar. The title translates to “The Lost Melody”. It was loosely based on Mervyn LeRoy’s 1942 Hollywood film ‘Random Harvest’ which in turn was an adaptation of James Hilton’s 1941 novel of the same name.

It tells the tale of Alok, a man who has lost his memory due to a railway accident. He undergoes treatment under Dr. Roma at an asylum but is very aggressive. When he escapes she takes him to Palaspur, a village where her father’s house is located. Thus begins blossoming of their love but things take an unexpected turn when he recollects his memory. 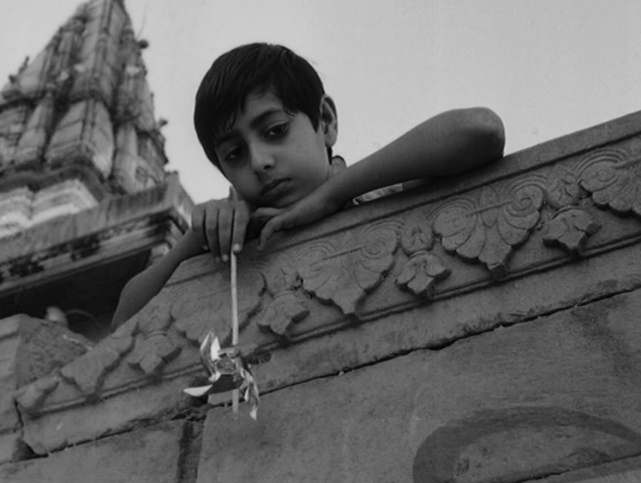 The title translates to “The Unvanquished”. It is the second installment in Apu trilogy.

Set in 1920, it begins where Pathar Panchali ended. It depicts Apu’s childhood and adolescence where they shift to Varanasi and hope to build a good life as his father Harihar becomes a priest. Aparajito is one of the Best Bengali Films of all the time. 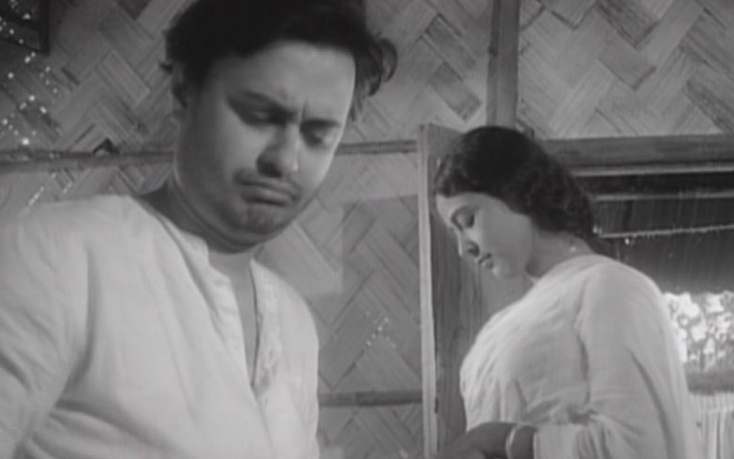 It is the first film in the Partition trilogy directed by Ritwik Ghatak. The title translates to “The Cloud-Capped Star”. It is based on Shaktipada Rajguru’s novel of the same name.

Ghatak could never reconcile with the reality of the painful partition of India and he poured all his emotions into the films in this trilogy.

Rather than being obvious in its storytelling, the film never mentions partition directly. It is set in a refugee camp located in a Calcutta suburb and centers on a Hindu family.

Like Ray’sPather Panchali, it is too considered as one of the greatest films of all time.

The title translates to “The Music Room”. It is a drama film directed by Satyajit Ray. It is based on Tarasankar Bandyopadhyay’s short story.

The film portrays the subsiding days of a zamindar (landlord) who is trying to maintain stature despite failing finances due to floods and the government’s abolition of zamindari system. 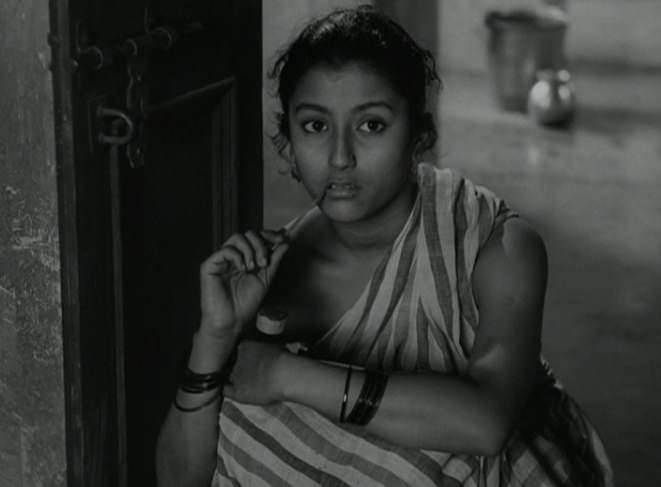 It is an anthology directed again by Satyajit Ray. The title translates to “Three Daughters”. It is based on Rabindranath Tagore’s short stories.

It comprises of three stories: The Postmaster, Monihara (The Lost Jewels)& Samapti (The Conclusion). They all portray prominent instances of three young girls. 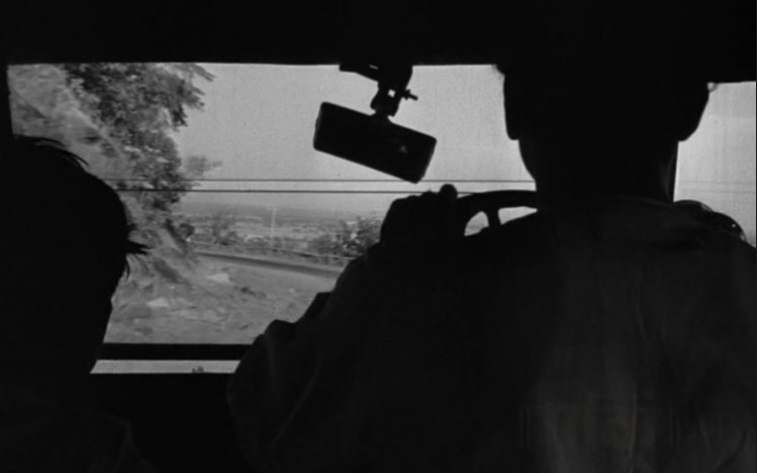 It is a comedy-drama directed by Ritwik Ghatak. It is an adaptation of Subodh Ghosh’s short story of the same name. It was titled as “The Pathetic Fallacy”.

The protagonist is Bimal, a taxi driver who lives alone. He drives a battered 1920 model of Chevy. But he loves it and even has a name for it – Jagaddal. The film journeys through various phases of his life along with him dropping passengers off.

It was so powerful in its nature that it influenced cab driver characters in Satyajit Ray’s 1962 film Abhijan and Martin Scorsese’s 1976 classic Taxi Driver. 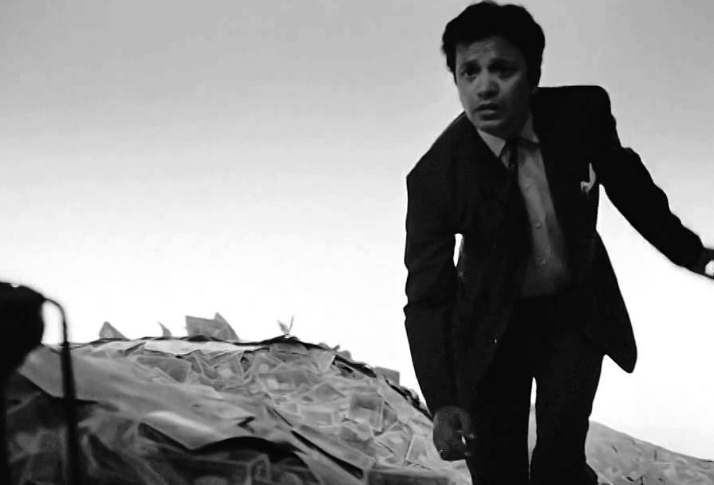 The title translates to “The Hero”. A drama is written & directed by Satyajit Ray.

The story is about a matinée idol, Arindam Mukherjee who has to take the train to Delhi as flight tickets are unavailable. He is going there to receive a prestigious national award.

A young female journalist, Aditi happens to bump into him and she plans to take a secret interview of his. Without realizing the situation, he goes onto divulging his inner persona, insecurities and later on gets into introspection mode.

Throughout this session, Aditi’s contempt towards him changes into pity as he gradually humanizes himself. 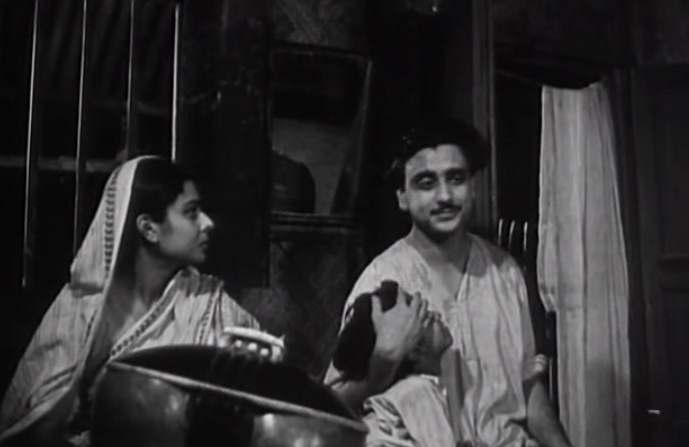 It is the final film in Partition trilogy directed by Ritwik Ghatak.

The protagonist is Ishwar, a Hindu refugee who has fled from East Pakistan (now Bangladesh) to West Bengal along with his little sister Sita, in hope to build a new life. By help from a friend, he finds a job in a factory near Subarnarekha River in suburban Calcutta, from which the film derives its title.

The film touches upon social evils like casteism, migration & its effects.

Do check Best Satyajit Ray Films You Should Watch.

Old Bengali cinema is Gold and list of Old Classic Bengali movies is huge. We couldn’t add all the best old Bengali Movies on this list, so we tried our favorite films. You can share some other film names in the comment section.