R.. Rajkumar is an action romance movie starring Sonakshi Sinha and Shahid Kapoor. The movie was earlier named Rambo Rajkumar. The word Rambo has been copyrighted by the makers of original Rambo series and that’s why the name of the movie had to be changed.

After the failure of Phata Poster Nikla Hero, R…Rajkumar is looked as another comeback for Shahid Kapoor. The movie is very important for the career of Shahid Kapoor. Sonakshi Sinha as stepped one more step in the movie as an actress, She has performed some action stunts in the movie, this could be the last chance for Shahid Kapoor , Box office collections of Shahid Kapoor’s Movies are falling everytime, and if the Box office Collections of R Rajkumar falls again then producers and directors will start thinking to reject Shahid for future projects. 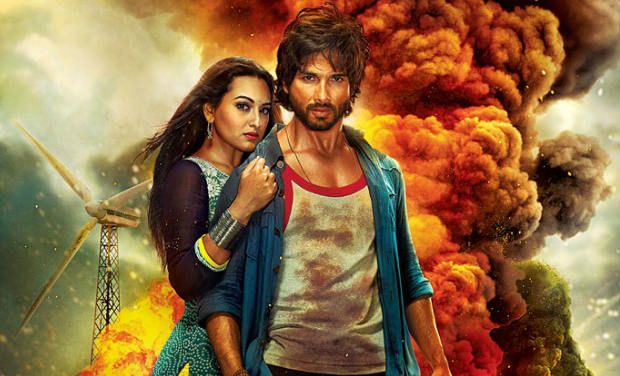 R Rajkumar is a masala entertainer with action and romance. Rajkumar (Shahid) is a young boy who doesn’t have any aim or aspiration from life. Rajkumar is a fearless boy who can take stands and fight. Rajkumar works with a drug Baron, Shivraj (Sonu Sood). Shivraj gives Rajkumar  a mission to kill his rival dealer. But Rajkumar falls in love with Chanda (Sonakshi Sinha) who is an orphan raised and bought up by the rival whom Rajkumar has to kill.

R… Rajkumar music has lots of flavor in one single album. None of the song is a part of the narrative and are full bang on songs. Catchy phrases and lines with hyper energetic rhythms give the album a boost. Whereas the songs aren’t up to the mark, they aren’t bad too. Some of the songs like Gandi baat and Saree ka fall sa are making the youth groove. Dhoka Dhadi is a romantic number in the album. On the whole FilmyKeeday give the music of R Rajkumar 3 stars.