Shaadi Ke Side Effects is romantic comedy film directed by Saket Chaudhary. The film is the sequel of Pyaar Ke Side Effetcs. The film, Shaadi ke Side Effects stars Farhan Akhtar and Vidya Balan in the Lead. The movie is a fun film dealing with post marriage clashes and issues by today’s young couple. 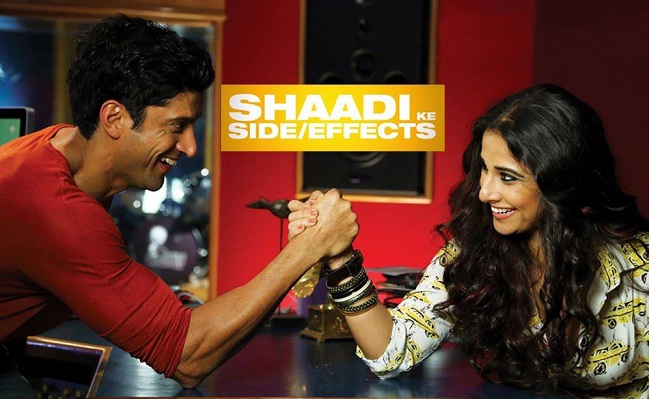 Shaadi Ke Side Effects is a fun film about a young married couple, Farhan Akhtar and Vidya Balan. After the success of the prequel, Pyaar ke Side Effects, audience is waiting for the movie, which is going to hit the cinema halls on 24 Feb 2014. The all fun dialogues, clashes and love-dovey romance of this young married couple will entertain you. With Shaadi Ke Side Effects get ready to have a look at Pregnancy ke side effects and of course Babies ke side effects. Sounds fun, waiting for the movie to release, if it actually provides that much fun.

Although the whole album is not a completely amazing album, but a few songs have make mark and are topping the charts like “Harrys not a Brahmchari”. The music has not been promoted very nicely apart of one two songs and that is the reason most of the songs of the film are not that popular. On the whole I would give the music of Shaadi Ke Side Effects ** stars out of 5.