Ending the rumors, Hrithik and Suzanne are finally heading for a divorce. Yes, the couple who were in much love are getting separated. The high profile couple was on the radar of rumors from quite a long time. Recently, when Suzanne left Hrithik’s home, the rumors again caught the fire becoming headlines. Hrithik confirmed the news on his personal Blog.

The main reason for the divorce is not yet confirmed by Hrithik or Suzanne. But if the rumors are to be believed the relationship of the couple started getting distasteful soon after Kites. The famous Lip-Lock between Hrithik Roshan and Barbara Mori which was followed by more rumors of their alleged link up started souring Suzanne Khan and her relationship with Hrithik. 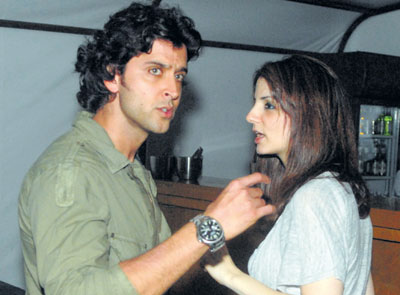 It is believed that alleged link ups of Hrithik and his female co-stars were eating up their marriage. Recently, Suzanne left Hrithik to stay with her parents and didn’t come back. She was seen making  a brief visit at the birthday bash of Rakesh Roshan but went back. She was not even seen at the Ganesh Visarjan ceremony this year. Suzanne was seen participating in the ceremony of Ganesh Visarjan every year.

It is believed that Suzanne doesn; t want to be in the relationship anymore. She is not able to cope with the alleged rumors of linkups of Hrithik with his female co-stars. The couple has called the marriage a quit.