Finding Fanny is a satirical film directed by Homi Adajania. The film is being released in Hindi and English worldwide. However, Indians are luckier, as the film will be released on September 1 in India, but the rest of the world will have to wait for 11 days, for a worldwide release of Finding Fanny. Arjun Kapoor and Deepika Padukone will be seen in the leading roles, along with Naseeruddin Shah, Dimple Kapadia and Pankaj Kapoor. Ranveer Singh will be seen in a special appearance in the film.

Imran Khan and Sonam Kapoor were the first to be approached for the film, but they both turned down the offer and Homi Adajania, kept the film in back in the bag in 2009. However, during the film Cocktail, Homi Adajania narrated the script of Finding Fanny to Deepika Padukone, which she liked a lot. 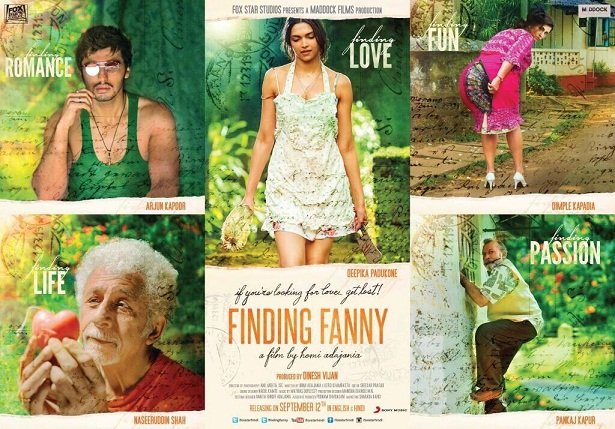 Finding Fanny is a satirical film that revolves around 5 characters from a small village, Pocolim of Goa. The 5 distinct characters meet on a trip under random circumstances. Deepika plays the role of a young widow, Arjun Kapoor is a bitter mechanic, Pankaj Kapoor is a belligerent Artist, Dimple Kapadia is an obnoxious self appointed “Lady” of Pocolim and Naseeruddin Shah is an old postman, who is on the trip to find his love of life, he missed 46 years back.

The music can be a little disappointing for music lovers, as there are only 4 songs . I will give 3 stars to the music of Finding Fanny!