Dedh Ishqiya 2014 is the sequel of Ishqiya 2010, directed by Abhishek Chaubey. Dedh Ishqiya stars Naseeruddin Shah and Arshad Warsi like prequel Ishqiya. As a new flavor, Madhuri Dixit Nene and Huma Qureshi will be seen in Dedh Ishqiya. Before Huma Qureshi, the role was given to Kangana Ranaut, but because of dates issue Kangana was replaced. 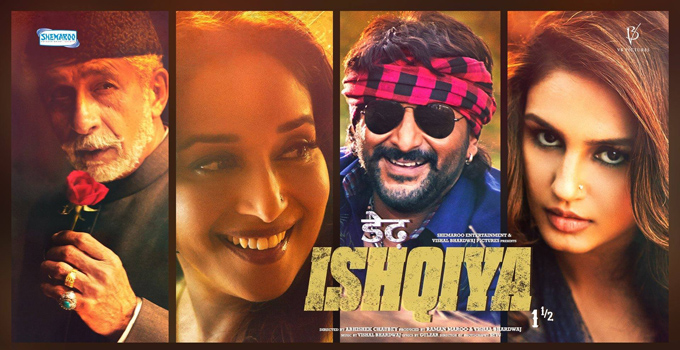 Dedh Ishqiya story has got thrill and comedy with the spice of Romance. Huma Qureshi has been cast opposite Arshad Warsi and Madhuri will be seen romancing Naseeruddin Shah. The pairing is new and refreshing and watching Madhuri back in full form after so many years is definitely going to be a treat for her fans.

Dedh Ishqiya music lyrics are given by Gulzar, so it has that melodious poetic lyric that gives the feeling of old music that is meant to be evergreen. With the lyrics by Gulzar, it is Madhuri Dixit’s expressions that give the added glam to the music of Dedh Ishqiya.